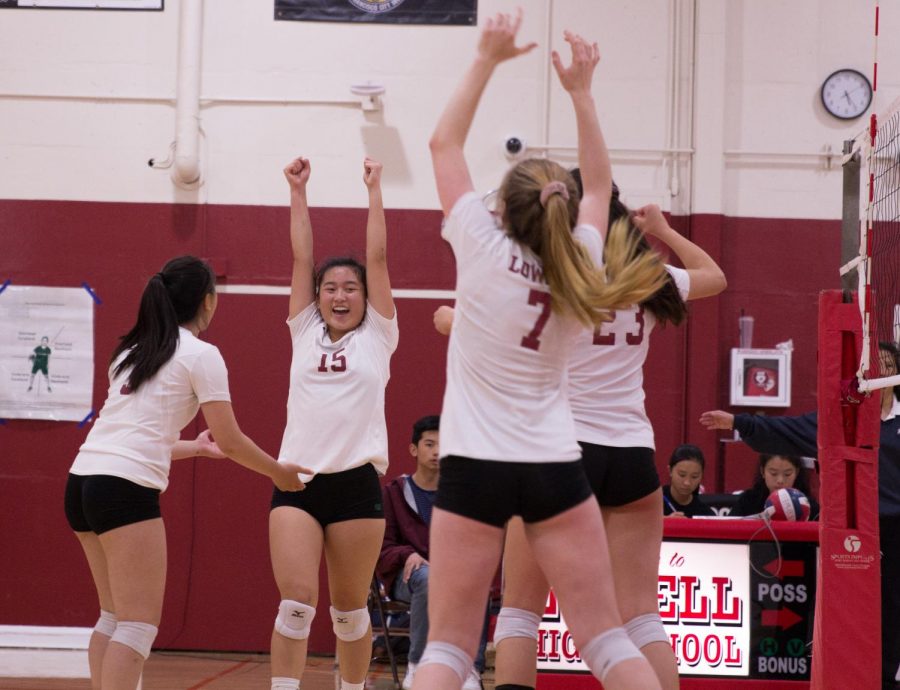 The lady Cardinals cheer for their victory after the first set ends in the game against the Lincoln Mustangs on Sept. 28.

The Cardinals were defeated 3-1 by the Lincoln Mustangs on Sept. 28. Prior to the game, both the Cards and the Mustangs stood undefeated this season.

The first set began on even ground. The Cards seized an early lead through some solid serves by junior libero Kailee Bumanglag. However, as the Mustangs’ defense closed and their serves started to land, Lowell began to lose its edge. Lincoln quickly gained the lead, and for a time looked in a position to win the set. As the set went on, however, a burst of vitality and several excellent blocks by sophomore middle blocker Alina Qi allowed Lowell to catch up. An invigorated defense by the Cards continued to prevent Lincoln from claiming the set, and the Cards eventually won the set 25-20.

Lowell again took an early lead as the second set began. Senior outside hitter Eunice Go scored several points for the Cards, leaving the Mustangs racing to catch up. Lowell held onto its lead for a time, but it was fairly short-lived.  Despite a number of strong serves by senior setter Sinead Beaupain and a formidable defense by sophomore middle blockers Kenedi Edmunds and Mariko Tanaka, the Cards found themselves unable to score. As the set drew to a close, the Cards managed to regain some momentum but not sufficient for securing their victory and they lost the set 23-25.

With the two teams tied, the tension grew immensely as the third set began. Tanaka scored for Lowell several times through a dink, bypassing the Lincoln defense, while senior middle blocker Betsy Li took over blocking the Mustangs’ shots. The Cards’ teamwork was impeccable and they held onto the lead for the majority of the set. As the set went on, however, it became clear that Lowell’s midcourt was lightly defended and Lincoln scored again and again. Though the Cards made a very strong showing, Lincoln eventually won the set 25-22.

The fourth set was difficult for Lowell. The Cards struggled to block Lincoln’s incoming shots as the Mustangs’ lead continued to grow. While brutal hits by Qi and a powerful serve by junior libero Kimberly Yee allowed the Cards to close the gap, Lowell’s defense was not enough, and the Cards lost the set 25-16.