What it takes to run a meet 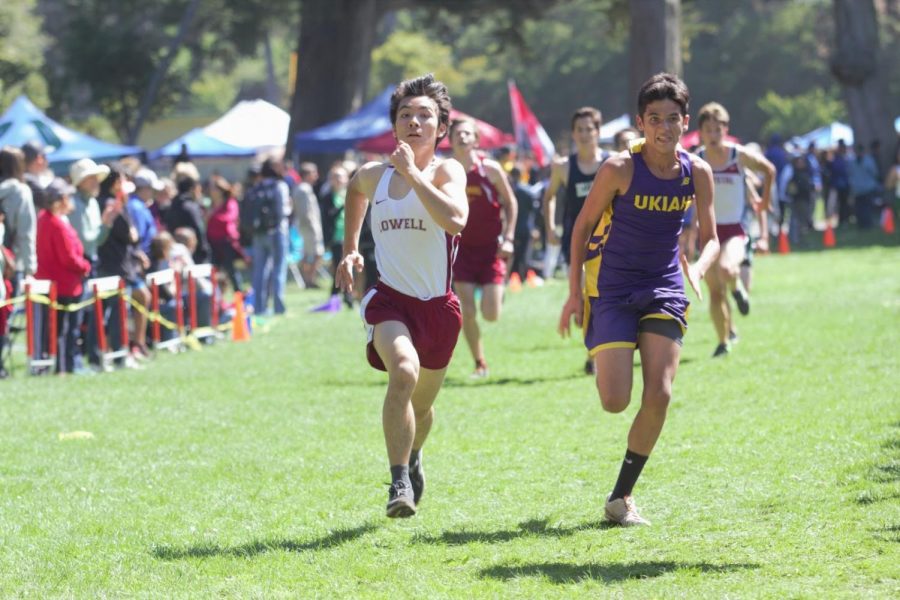 Senior Ryan Lee hustles to the finish line in heat 1 of the JV boys race at the Lowell Cross Country Invitational on Sept. 8 at Speedway Meadow in Golden Gate Park. He finished in 29th place out of 272 runners in his heat.

The 46th annual Lowell Cross Country Invitational meet broke the morning silence of Lindley Meadow at Golden Gate Park on Sep. 8. Eighty-two high schools from all over California attended the meet, maintaining the record of invited schools set last year. Under the cardinal red concessions tent, the meet director and head coach of Lowell’s track and field team, Andy Leong, was busy delegating volunteers to their designated booth or location on the course.

As the meet director since 1989, Leong has witnessed the number of participants grow from only a few hundred to nearly 3,000 today. According to Leong, the history of the Lowell Invitational dates back to 1973, when Herb Blanchard, a member of the San Francisco Prep Hall of Fame, founded the event, then called McAteer Invitational. For the first few years, the meets took place on the McAteer campus, now the SOTA campus. As the meet expanded its size, Blanchard invited James Thomas, who was the track coach at Lowell in 1979, to become the co-sponsor and changed the name to the McAteer-Lowell San Francisco Invitational, establishing the foundation of the meet today.

Leong attributes the success of the meet’s expansion to the distinct nature of San Francisco. The most appealing factor is the weather. “People love the weather here,” Leong said, “because many teams have been running in 90-degree [heat] where they are from.” Another factor was the local attractions. Drawn to the popular destinations such as Golden Gate Park and Pier 39, many invited teams plan a “fun day,” as Leong put it, or an overnight trip to the city for the meet.

Granite Bay High School was a fourth-year-invitee to the meet. Despite having to commute on a charter bus at five in the morning, the team still enjoyed “running on a historical course under 60 degrees,” said its coach, Carla Kehoe.

Equally important in contributing to the Invitational success is the strong collaboration between Lowell coaches and the Lowell athletics department. Aside from organizing the meet with his coaching staff and the track and field team, Leong was also supported by the school’s athletics department, which “helped with the insurance and various issues like paperwork,” according to Leong.

For many runners, this invitational granted a weekend for them to spend with their teammates, while it prepared them for the season. Lowell freshman Ben Lester, the first Lowell athlete to finish in the Freshman Boys race, felt more confident about his future meets after this invitational. “At the start of this, I was super nervous,” Lester said. “But now I know how proud and relieved I would feel afterward, [so,] I am excited to run the next one.”