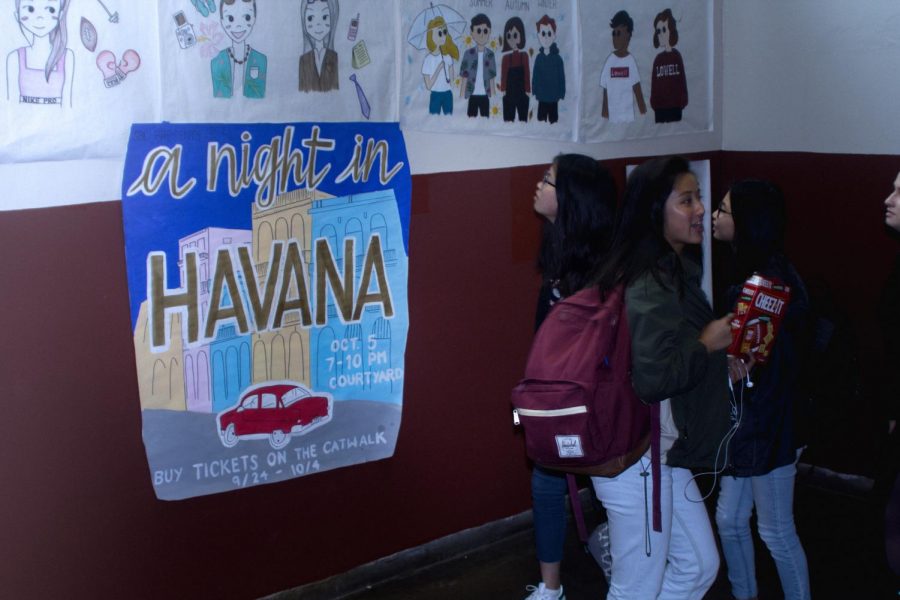 Students observe the "A Night in Havana" poster.

This year’s homecoming theme is “A Night in Havana.” With the dance fast approaching, some students wonder if the theme is appropriately sensitive to Cuban history and culture.

Student Body Council is confident the dance will be inclusive and educational, according to senior President Almarie Mata. Along with junior SBC Dance Coordinator Aracely Seminario, Mata has spoken with both La Raza, Lowell’s Latin culture club, and the Minorities Club to arrange Latinx dancing and the sale of traditional foods at homecoming. “All the feedback I’ve received from the Minorities Club has been really positive,” Seminaro said. “They’re excited because they’ve never been given such a big platform to celebrate Latinx culture as a school.”

Additionally, October is Hispanic Heritage month, and SBC is trying to use the dance as a way to acknowledge Cuba’s history and educate the student body, according to Seminaro.

Not all students are entirely comfortable with SBC’s choice of theme. Senior Kelly Saldaña first spotted posters announcing the dance last monday. The signs advertised the theme “A Night in Havana” and showed a red 1950s tailfin car. Saldaña initially did not give these posters much thought, but as the day progressed, she acknowledged something about the theme “sat the wrong way.”

After further considering the issue, Saldaña feels the use of vintage technology on the poster romanticizes Cuba’s history of oppression. “The ‘stuck in time’ aesthetic of Havana is due to Castro and his regime and the U.S. embargo, the people didn’t choose that way of life,” she explained. An American high school using the consequences of Cuba’s communist regime for entertainment does not strike her as appropriate.

Both Mata and Seminario stress the amount of thought and planning put into making the “A Night in Havana” theme as culturally sensitive as possible. “I definitely see the sensitivity of bringing a culture in, but it’s a way to educate students through a fun and meaningful dance,” Mata said. Senior SBC Events Coordinator Adam Flores and Seminario, both Latinx, worked to develop the idea, and Seminario has been researching Havana ever since. Along with colorful lights and streamers representing Cuba’s vibrant culture, she has decided to include photos of Havana with captions describing the city as part of the party’s decorations. The concept for the posters with which Saldaña takes issue was also the product of vigorous online research. “If you look up Havana, these are the types of pictures that come up,” Seminario explained.

As Friday’s dance approaches, Saldaña and the SBC officers find common ground in their hopes that homecoming’s theme will prove a positive learning experience. “It’s not cultural appropriation, we have a purpose and we have an intention of teaching,” Mata said.