J.Lo to Lowellite on American Idol, ‘You’re talented, but you cray’ 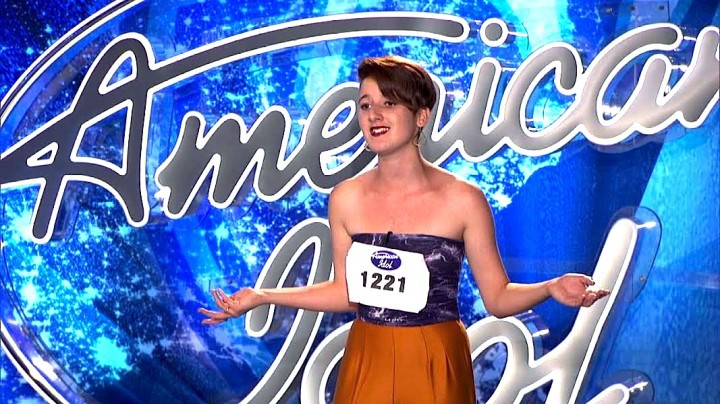 “My psychic cat, Mustafa, told me to do it,” answered sophomore Katherine Skinner when the judges asked her who inspired her to audition on American Idol. Skinner was on television twice, showing off her talent and charm in front of Jennifer Lopez, Keith Urban, Harry Connick, and the entire world from Jan. 16 to Feb. 12.

The first time she appeared was at the San Francisco audition, when the show first aired. Skinner came onto the screen with her “pimp coat,” told the judges about her psychic cat, and then proceeded to sing Florence and the Machine’s “Shake It Out.” Her entire act shocked them so much that even Lopez said “you are talented, but you cray.” The second time she appeared on the show, Skinner sang Celine Dion’s “Alone” for the last round on Hollywood Week, where for seven days, the cast split into performing groups. Unfortunately, this is where the judges believed Skinner messed up, and sent her home.

“Very few people can do that. Maybe women like Kelly Clarkson and Whitney Houston could hit those notes, and she can, too.”

Now, rewind to August 2014, when Skinner’s private singing coach, Victor Cervantes, called Skinner to tell her that he had signed her up to audition on American Idol. Cervantes chose Skinner, along with another five out of his 40 students. He chose Skinner not only for her talent, but also for her ambition. “Katherine is maybe one of my only students who really works hard and wants to be successful in music and singing,” Cervantes said. “She can hit very high notes, like an F and a G. Very few people can do that. Maybe women like Kelly Clarkson and Whitney Houston could hit those notes, and she can, too. It is very special and rare.”

Skinner began her training with Cervantes at his summer camp three years ago. There, during her first solo performance, Skinner had an epiphany. “I actually got stage fright, which is really funny,” Skinner said. “I went on stage and sang, and it felt like the most amazing experience of my life. When I got off stage, I thought to myself ‘This is what I need to do with my life.’ I did not even want to sit back down; I wanted to be back on that stage.”

Instead of jumping in excitement, Skinner’s initial reaction was to reject the offer. “I did not think it would work out because they cut even the most amazing and talented people, and I just seemed so young and inexperienced compared to all of them,” Skinner said.

For eight weeks before auditions, Cervantes and Skinner worked on transforming Skinner from a musical theater singer to a pop artist — the style of music commonly sung on American Idol. According to Cervantes, Skinner has all the star qualities — she is funny, relaxed, and comfortable in a professional setting, along with just having an amazing talent.

Going into her first audition, Skinner used her sense of humor to capture the attention of the producers and judges.

“I got on the show because at the first cattle call [audition], there was this thing called the story sheet, and it had all these questions on it about our lives,” Skinner said. “I just made up a bunch of crazy stuff just to get attention because they needed something to be interested in right away. For example, one of the questions was ‘do you know anyone famous or are you related to a celebrity?’ So I wrote ‘I partied with Bowie in the ‘70s.’”

The crazy act was a success at first. When Skinner walked into her audition, JLo complemented her pimp coat. “She was all like ‘I love your outfit!’” Skinner said. “And I was just like ‘girl, I love you!’”

After Skinner’s audition aired on television, she looked herself up on Google for feedback. From her cat Mufasa to her pimp coat, Skinner was not at all shocked by everyone’s intense reaction to her bold audition. Before Skinner made the decision to act insane, she talked to Cervantes, but he told her not to do it. However, the producers liked the idea and told her to continue with it. “It started out as a joke, but then it evolved,” Skinner said. “I did it to make people talk, and that is exactly what happened. It was one of the most genius choices I have ever made. After all, there is no bad publicity.”

Next, Skinner flew to Los Angeles for Hollywood Week. For Skinner, this was the most stressful and sleep-depriving points of the experience. “I fell asleep in the holding room, and I was being filmed,” Skinner said. “I was drooling and there was a camera in my face. It was little things like that — where the cameras capture awkward moments that are very candid.”

A challenge that Skinner faced during her time on American Idol was keeping up with school work, as she missed two weeks to participate on the show. To support her, Skinner’s teachers and peers constantly kept her updated with the latest assignments. “I had friends who would update the entire class, so they would go ‘Oh! She passed the round! Yay!’” Skinner said. “Everyone has just been really sweet and supportive.”

Though her time on this season’s American Idol is over, this does not signal the end of Skinner’s career. She plans on going back next season. As she said on the show, “I am not giving up — I am going to keep swaggin’ on.”

Skinner feels that it was good that she was cut this year since she was not completely prepared to be on a live show just yet. But, she was still hurt when she found out she was cut. “It was a major come down, because I was riding this high,” Skinner said. “You wake up the next morning, and you are just a normal human being, not a star.”

Until the next season, Skinner will be starring in the school’s spring musical West Side Story, where she plays Anita, Maria’s best friend and Bernardo’s girlfriend. “I want to keep making music, making art — just keep doing what I do,” Skinner said. “Because that is basically all I wanted to do in the first place, show my artistry.”