The struggles of navigating the 504 process 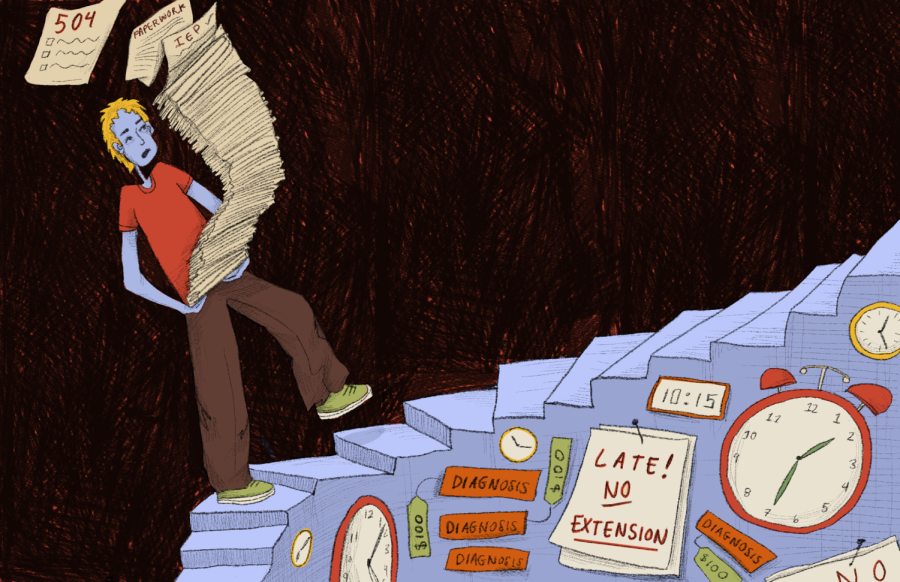 Senior Chloe Marinerstein sat in class, staring at the scantron in front of her. The words swam on the page as her dyslexia, triggered by the stress of an exam, worsened. All she could hear was, tap, tap, tap. Distracted by pencils scratching on paper and the ticking clock on the wall — sounds that her attention deficit disorder (ADD) focused her attention on instead of the words before her — time had begun to slip by unnoticed. She looked up at the clock on the wall, realizing that she had barely 5 minutes remaining. Panicking and struggling to comprehend the questions, Marinerstein hoped for a few right answers in a battle against her brain to complete the test.

Despite Marinerstein’s dyslexia and ADD worsening her performance in the classroom, she has been unable to acquire the necessary legal accommodations to combat her disabilities, such as taking tests in a separate room and writing on a computer instead of on paper during class.

In order to gain equal access to education, students with disabilities can apply for 504 plans: specialized plans that minimize learning barriers by allowing classroom accommodations. A 504 plan can improve a student’s academic performance, but these accommodations are not always guaranteed to students who need them. Obtaining a 504 plan can be difficult, leaving students confused and frustrated by the system. Once received, a 504 can be very beneficial to students. However, in some cases, students that do have such a plan are not properly given the classroom accommodations that they are entitled to. And, Lowell teachers have sometimes struggled with implementing the accommodations provided by 504 plans.

On Sep. 26, 1973, President Richard Nixon signed the Rehabilitation Act of 1973 into law, including Section 504, which guarantees certain rights to people with disabilities. Individualized for each student, 504 plans offer a range of accommodations, from extra time on tests to deadline extensions for assignments. According to Lowell’s school psychologist Rachel Holowicki, 504 plans are given to “students that have true disabilities or true health conditions that really impair them from doing their best at school.”

The process of applying for a 504 plan is not necessarily an easy one. “504’s definitely can be confusing, especially for students and families that have not gone through the process before,” Holowicki said. The first step in obtaining a 504 plan is for a student’s parent/guardian or teacher to reach out to that student’s school counselor.

According to Holowicki, each student in this process receives a case manager, who is their academic counselor. The case manager then arranges a meeting of a Student Support Team (SST) — a group consisting of the student’s academic counselor, teachers, and a Wellness counselor — to inform the student of alternative methods of support. At this point, the family may choose to apply for a 504 plan. This process requires that the student be given a formal assessment by a health professional, usually psychologist, to determine the disability. This can be performed at school or privately. The student must also be interviewed by the school’s 504 coordinator, as well as their academic counselor. Numerous forms must be filled out.

During distance learning, the process of acquiring a 504 plan became even more difficult, with all the interactions occurring online. Junior Charlotte Woo, who deals with “chronic mental health issues,” struggled to obtain a 504 plan over Zoom. Without face-to-face connection, she struggled to clearly communicate her needs with her teachers and counselor. “It was hard to schedule time to talk and I couldn’t just go up to them in school,’’ she said. “It was a painful, long process because I’m talking to these people that I don’t really know over Zoom about all of these things that I need to fix about myself.”

Once received, 504 plans can be a source of relief for students. Senior Archie Carew got a 504 plan to mitigate his academic struggles stemming from his anxiety and Tourette Syndrome, both of which diminish his attentiveness and impede the pace of his work. He first acquired a 504 plan during his junior year when Lowell’s “rough and overbearing study culture,” combined with his anxiety, became “crippling,” he said. He began to fall behind in his Precalculus Honors class, and his GPA dropped significantly. Carew’s 504 accommodations have greatly improved his performance in school. Carew feels that because he’s been given more leniency with deadlines and extra time on tests, he’s had more time to self-reflect and figure out how he learns best, instead of being overwhelmed by the pressure to achieve perfect grades. “Getting a

504 plan definitely lessened things, and now, I’m the happiest I’ve been in a long while,” Carew said.

Similarly, junior Wallace Tang views his 504 plan as a useful educational tool that he is able to rely on whenever he is struggling academically. In seventh grade, Tang was diagnosed with ADD, which hinders his ability to focus and causes him to sometimes be disruptive in class. Shortly after his diagnosis, Tang acquired a 504 plan, which allows him to sit in the front of the classroom to minimize any distractions. He felt the process was “daunting” for him and his family, but once accommodations were obtained, they made a real positive difference. “I would say that I have seen a significant difference from when I got the 504 plan from when I didn’t,” Tang said. “I started focusing a lot more and I started finding interest in school, something that’s really important for someone with ADD.”

However, not everyone who needs a 504 plan is able to get one. Marinerstein, who struggles with dyslexia and ADD, has been unable to acquire a 504 plan, despite repeated attempts. Marinerstein, who uses she/they pronouns, attributes their inability to acquire a 504 plan to their above-average grades and mild to moderate dyslexia. After being unable to obtain a 504 evaluation through Lowell’s psychologist because of their strong GPA, they submitted a third-party diagnosis to the school in Nov. 2021 in hopes of acquiring accommodations. Months later, they still have not heard back. As a consequence of their disorder having been overlooked by the school district, they say they have to “work a lot harder than the average person to get a grade that somebody who probably doesn’t have dyslexia could get.”

The counseling shortage at Lowell has also proved a problem for the 504 process. There has been a huge turnover of academic counselors at Lowell. And despite having a student body of approximately 2,700 students, Lowell has only one full-time school psychologist. Woo is one of the students who have suffered the consequences of this. After multiple meetings with her counselor, teachers, and parents, Woo believed she had obtained a 504 plan. However, she later discovered that this was not the case. Woo’s new counselor informed her that there must have been a miscommunication online and that Woo’s previous counselor must have never actually filed it.

Even after students obtain a 504 plan, teachers do not always honor their accommodations. Last school year, Carew reached out to his teacher about his 504 plan in hopes of gaining support in catching up in class. When he asked for an extension on a particular assignment, his teacher said that there would be a late penalty, which went against Carew’s accommodations. Carew felt frustrated by this disregard for his 504 plan. “He just kind of glossed over the fact that I [had a 504 plan] and just saw it as a student asking for an extension,” he said. Additionally, some of Carew’s teachers were not informed that he had a 504 plan, leaving him with the responsibility of explaining it every time.

On the other hand, teachers themselves aren’t always given clear instructions on how to implement the accommodations provided by 504 plans. Each time a student with a 504 plan enrolls in a class, the teacher is supposed to receive an email notification from the student’s case manager. However, according to social studies teacher Susan Lin, there have been times when she needed to ask the student’s counselor for the 504 plan details herself because she had not been automatically informed when the student enrolled. On several occasions, Lin has also had to consult the Resource Center or the student’s counselor to get more information about how she can best support them because administrative guidance was not clear or detailed enough.

The process of acquiring a needed 504 plan can be hard to navigate for students, leading them to give up. Carew believes that 504 plans need to be made easier for students to obtain and that teachers need to be better informed. “I just wish that students who need them were better informed on how to get them,” Carew said. Woo agrees that the process needs to be made simpler, stating that “at a certain point, it was getting so difficult that it didn’t seem worth it anymore.”