How Lowell athletics are dealing with omicron surge 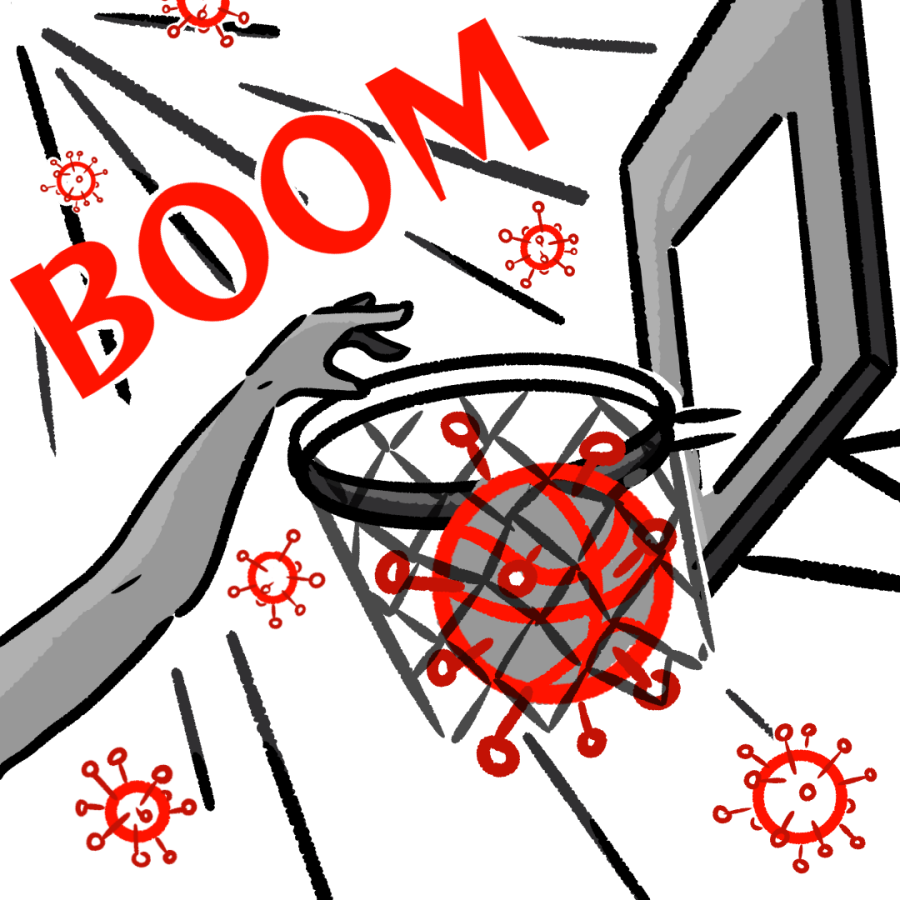 On Thursday Jan. 6, the Lowell girls soccer team canceled their after school practice in response to a new policy requiring athletes to test negative for Covid before playing.

They are not the only Lowell sports team being negatively impacted by the pandemic.

A surge in coronavirus cases, fueled by the Omicron variant, has affected the sports schedules of Lowell student athletes. Positive cases among winter sports teams resulted in canceled games and practices—and weakened spirits among athletes.

According to the Lowell girl’s soccer team captain, junior Audrey Duane, players are now required to have a PCR test performed every Friday and must receive a negative result before attending practices and games. If two or more players on the team receive positive tests, those players must isolate at home for 10 days and the entire team is required to test again. Soccer practice was canceled again on Monday Jan. 10 because the team had not received their PCR test results. For junior Josefine Gebhard, the main priority is safely getting back on the field. “All we want to do is play and have fun together,” she said. “If that means canceling a couple practices to get tested, we will gladly do so.”

Similar to the girls soccer team, the Lowell boys soccer team has begun PCR testing for COVID-19 once a week in preparation for upcoming practices and games. Players who test positive are not allowed to practice or play in any games until after quarantining for at least 10 days and testing negative. On the other hand, players who test negative are allowed to continue practicing.

Lowell boy’s soccer game against Galileo on Jan. 6th was canceled and postponed the day prior due to positive cases being reported on the team. According to one player, who requested his name not be used, these abrupt changes have caused stress among the team. “The players don’t want to test positive because they don’t want to be the ones to infect other people,” the player said. “The coaches, staff, and players are doing the best job they can.”

Since Jan. 6th, three more games have been canceled and postponed for boy’s soccer. Players are notified the morning of the game if it has been postponed or not, and left in the dark of the new dates.

Lowell’s cheer team is also required to get tested on a weekly basis—on Tuesdays and before competitions. According to senior and captain Alice Eng, the team had difficulty constructing routines in preparation for their regional competition on Jan. 8 because of team members missing practices. With two members contracting COVID-19, the team was at a disadvantage before they hit the courts on Jan. 14 for this year’s Battle of the Birds basketball game.

The girls varsity basketball team has canceled multiple practices and games within the last two weeks, due to a collective of five athletes testing positive for COVID-19. On Jan. 10th, the Academic Athletics Association (AAA) canceled the basketball game between Lowell and Lincoln High School, although the reason has not been disclosed. The team resumed practices on Monday Jan. 10th. The athletes are required to get tested weekly in order to play. With their season interrupted, many team members are concerned about the likelihood of more practices and games being canceled. “It’s really upsetting and frustrating, especially because it’s completely out of our control,” junior Keira Wong said.

The boys varsity basketball team has also delayed their season after players were exposed to the coronavirus. According to senior Eustache Westphal, six players, over a third of the team, tested positive for the coronavirus. To prevent further transmission of the virus, two games have been postponed and practices were called off, but resumed on Monday, Jan. 10. The team is also administering COVID-19 tests every Friday. The inability to practice on the court with teammates has stirred up heavy emotions for senior Van Luu. “It’s been four years, you know, this is our last year,” he said. “Basketball basketball basketball, that’s all I think about, and it just sucks that we can’t be hitting the court right now.”

The coronavirus has also affected the wrestling team, which is dealing with COVID-19 concerns. According to senior Kenzo Yee, the team is following San Francisco Unified School District protocol and testing weekly. The team canceled their first practice Saturday, Jan. 8, due to the spread of the coronavirus and the increase in close contact notifications among the team. According to the CIF website, two tournaments on Jan. 11 were postponed and canceled, against San Francisco International High School and John O’Connell High School respectively, although the organization responsible for these scheduling changes has not been confirmed. “I worry for our season,” Yee said.